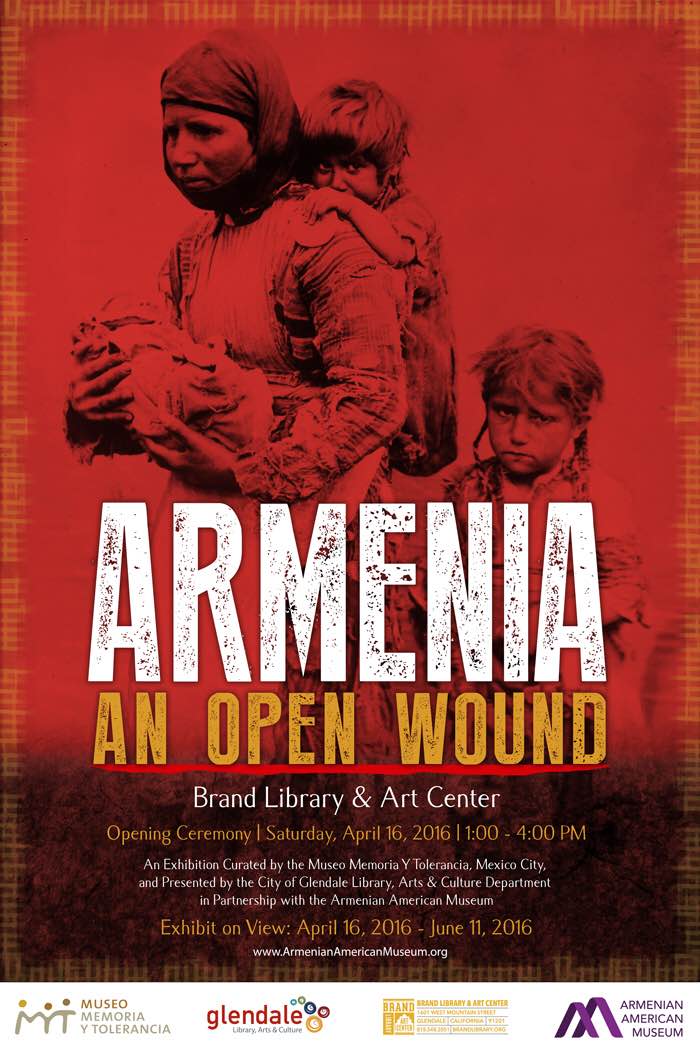 GLENDALE, CA—The City of Glendale and the Library, Arts & Culture Department are pleased to announce their partnership with the Armenian American Museum to present the exhibition “Armenia: An Open Wound”. The exhibit will be on view at the Brand Library Art Galleries between April 16 and June 11, 2016 during the library’s regular hours: Tuesday and Thursday 12-8pm, Wednesday 12-6pm, and Friday and Saturday, 10am-5pm. A series of weekly programs will accompany the exhibition. Brand Library & Art Center is located at 1601 West Mountain Street, Glendale, California, 91201.

“Armenia: An Open Wound” debuted in Mexico City at the Museo Memoria Y Tolerancia [Museum of Memory and Tolerance] in April 2015 in honor of the Armenian Genocide centenary. The exhibition explores the intricate history of the Armenian people and creates an interactive experience by illustrating early Armenian culture; it shares the story of Armenian livelihoods on their ancestral lands, and prepares viewers to gain a deeper insight into the events which lead to the 1915 Armenian Genocide.

“[The exhibition] seeks to raise awareness about the Armenian Genocide by inspiring reflection, respect for ethnic and cultural diversity, and upholding human dignity” stated Museo Memoria Y Tolerancia temporary exhibitions director Linda Atach Zaga. “The Armenian Cause is rooted in the universal theme of preserving memory as the first step in mobilizing toward global human rights and this exhibition is uniquely designed to encourage critical reasoning among diverse audiences as they relate the Armenian context to broader social justice themes.”

The mission of the Museo Memoria Y Tolerancia is to preserve, teach, and promote within Mexican society the history and meaning of genocides and crimes against humanity, as well as the importance of diversity and tolerance.

Designed on the basis of a detailed, didactic route, “Armenia: An Open Wound,” sheds light on both the historical and current ramifications of the 1915 Armenian Genocide through survivor testimony, modern-day pursuits for justice, and aims to empower visitors to take responsibility on behalf of all those who have been, and continue to be affected by genocide. In addition to honoring victims and commemorating the Armenian Genocide, this exhibition presents the unique contributions of Armenian Genocide survivors who settled in Mexico during the early 20th century, and the international Armenian diaspora community who have collectively grown to embody the concept of global citizenship.

“It is our honor to announce our partnership with the Museo Memoria Y Tolerancia and we equally commend the City of Glendale Library, Arts & Culture Department for their commitment to engaging diverse collaborative opportunities” stated Armenian American Museum executive development committee chairman Berdj Karapetian. “Armenia: An Open Wound tells the story of Armenians through a multicultural approach, and exemplifies the eclectic programs and exhibitions the Armenian American Museum aspires to bring to the City of Glendale and the broader Los Angeles community.”

City of Glendale Library Arts, & Culture director Cindy Cleary shared her enthusiasm about the opportunity to partner with the Armenian American Museum by noting, “this exhibition supports the Library’s mission to offer our community a diversity of ideas that will inspire curiosity and enrich our daily lives.” Cleary further expressed that she “hopes all members of the public will share in this unique experience that celebrates the history and the resilience of the Armenian people and commemorates the horrific consequences of the Genocide.”

A robust slate of programs that will complement “Armenia: An Open Wound” is being planned by the Brand Library & Art Center and the Armenian American Museum in collaboration with local and regional community partners. The educational experience of visitors will be enhanced by lectures, discussion panels, musical performances and more. All events at Brand Library & Art Center are free and open to the public.